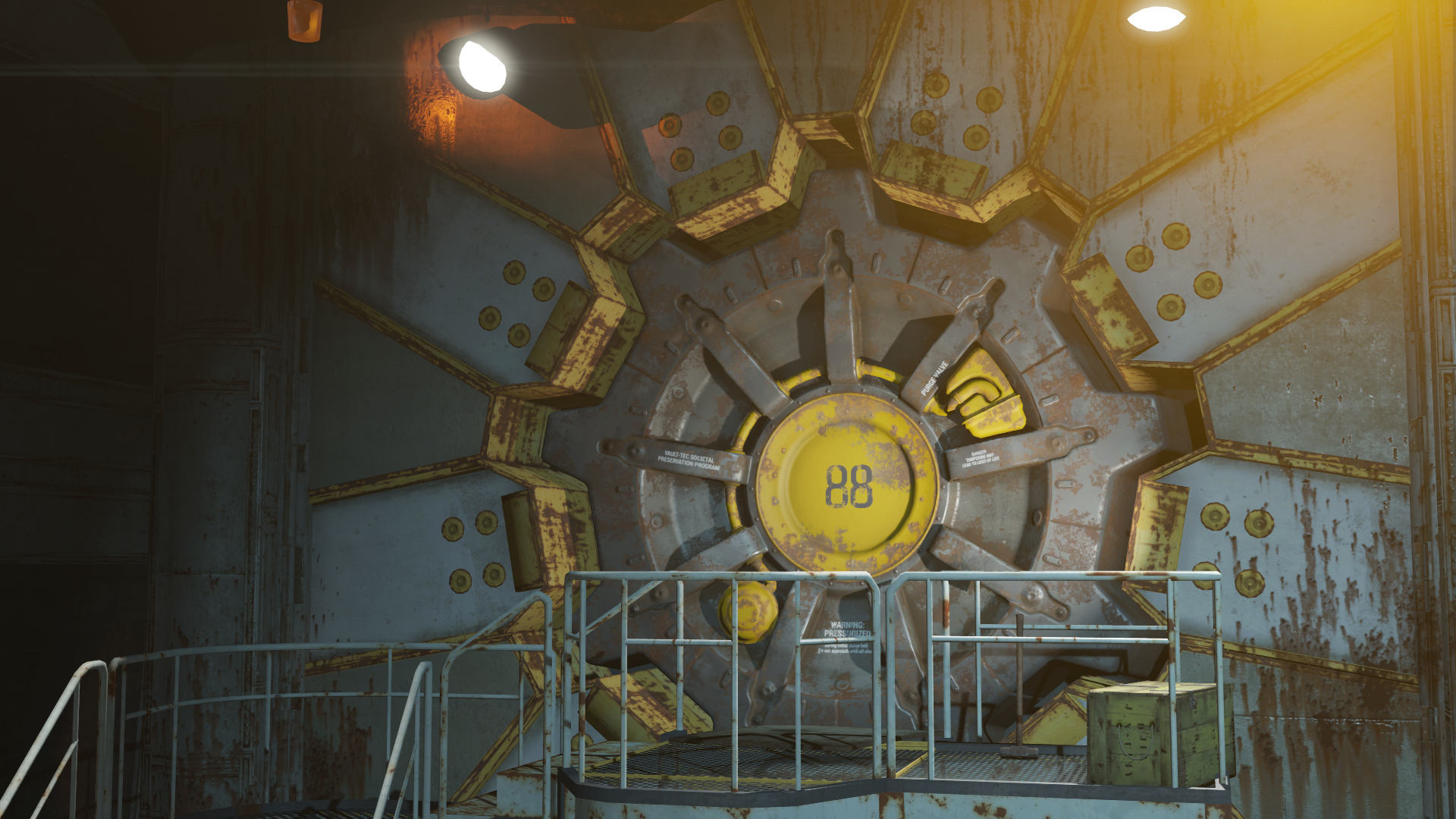 Theme Suggestions:
a) A very very very clean and tidy post apocalyptic haven.
b) A middle ground. Some bits are working OK and some bits are not.
c) OH MY GOD! THE HORROR, THE HORROR!

Important Notes about this Round
Vault 88 is part of VTW and is only unlocked as a settlement after completing the relevant quest.
Kinggath has included a save with with the settlement unlocked all quests complete in the the City Plan Contest mod.
Vault 88 can be a bit tricky to build in. The CP Team STRONGLY RECOMMENDS that you focus your build in the main 1st cavern and the entryway. You have been warned!

Any chance we could open up Far Harbor DLC for a Children of Atom build?

I keep meaning to try and build this place up with a scrappy what's to hand feel, but always get tempted by all the vault stuff and end up building a 'nice clean vault' that uses up too much space and ends up crashing my machine. Maybe this will be an opportunity to test my willpower

Hope to see lots of people making their mark on this great big space this month.

The city plan contest mod on ne us says it is for the march contest but shows it was updated on the 20th of march, is that current for this contest?

@Choochoo1 - @kinggath has just updated it to be fully V88 ready!

Any ideas why I can't build anything in 88? This is a new one for me.

Well, technically I can, but it disappears after 0.6 seconds.
Don't have any problem building elsewhere.

Are you using the save that comes with the contest mod?
E

No. I had already been building in the Forgotten Vault (88 upgraded), but figured I would use the Real 88 if I was going for a city plan. I'll switch over now & report back....

...Well.
After downloading the contest mod again to get the new version with the save file: Yes, working fine.
Thank you.
U

looking forward to seeing what you come up with

hehe deff use the real V88 for the contest

Do we still need to build a recruitment beacon? Asking because the vault already comes with one
U

The Vault Beacon should be fine.
E

Don't scrap the original vault beacon!
It's self powered, and there is no connector to power a copy of it.
So unless the player goes Free Powered devices, which is for Everything, it won't work.
It's an Old issue in Vault 88 with TS.
If a city plan scraps it, the player's vault needs a connected replacement. FOREVER MORE.

I expect the Built-in scrap profile replaces the hidden wiring for the vault doorway in case somebody used scrapall in 88 before starting their city plan. Doesn't help the replacement Beacon though.

wait do you have to have an advanced industrial plot?

Karvoc said:
wait do you have to have an advanced industrial plot?
Click to expand...

Oh yeah, I hadn't read that properly before. Also just noticed that it needs at least one of each type of residential plot (interior and exterior). Bit more complex this month.

NDCowdy said:
Oh yeah, I hadn't read that properly before. Also just noticed that it needs at least one of each type of residential plot (interior and exterior). Bit more complex this month.
Click to expand...

I mean thanks to PRA I have a plot that makes sense from that range.
E

Project Blueprint / Special / Effects / Cryo / MPSCannonballtrail
After placing it worked fine, able to move etc...
And another two, I forget which ones.
After reloading save today, it's marker is gone so I can't interact with it anymore (and worry about it not being scanned). All the rest of the markers show fine including ones I placed at the same time.
Any ideas why? so it doesn't happen again.
Ideally a way to make them visible again so I don't have to revert.
U

Thank you, that did fix it.

Some still can't be highlighted anymore, but I can see then to target them in console so it' ok.
Guess it's not quite the same as the shortcut key show all objects then.

Edit: SO... I couldn't highlight to select it because: There was something else on top of it, big enough to not be seen in the area. And even after I moved it with the console it was still "there" because I didn't can't pick it up again after I put it down, so I can't put it somewhere else....
Sigh... Delete object, resume building.

Edit2: The Object in question, that covered about a 1.5x1.5 circle, and couldn't be picked up again, was "RAD CLEANER - SLOW". I ASSUME the family of 4 all have that issue.
Not being able to pick it up again is the Real issue of course.

Edit3: Is there a place to report issues with Project Blueprint objects? Anything in particular we should report? No-Collision is common, but I assume the team already knows about them, just haven't done it yet because that's WORK.
What about misplaced items? That are in the wrong category? Such as Everything in Resources > Misc which should be in Decorations > somewhere instead. Or Missing things:
Resouces > [Power / Water / (No Food Items/Production) / Misc(Contains no resouces) ]
Last edited: Apr 22, 2020
U