Vanilla Workshop Basics​
In this article, we’ll be exploring the vanilla Fallout 4 settlement mechanics. The information provided below was derived directly from the Creation Kit and base game scripts, where possible. If it wasn’t possible for me to figure the mechanics out from the source, I used the Creation Kit wiki and in-game testing. To help enhance the experience for both users and modders, I specifically reference which scripts and script functions control which mechanics. For our more mathematically inclined readers, I’ve translated the script functions into mathematical formulas so that people who aren’t code savvy can at least see how the calculations are made. Unlike previous Educational Vault articles, I’ve adopted a list format for this article so that hopefully it is easier to read. Let me know what you think.

It is important to note that many of the values in the formulas below are hard-coded into the relevant vanilla workshop scripts. They cannot be changed with an esm/esl/esp file alone; they must be overwritten by a replacement script. This is partly explained by the tenuous nature of the settlement system’s place in Fallout 4. According to the Noclip documentary entitled “The History of Bethesda Game Studios - Elder Scrolls / Fallout Documentary”, the settlement system was not initially included in the design for Fallout 4, and was added later in development as the result of a game jam session. Section starts at 1:18:30 -
The Studio Director and the Lead Producer both say that the settlement system was up for removal from the game from the moment it was introduced until just before release. The team was highly skeptical about how much players would care about the system, and felt that it was ancillary to the game they were trying to create. Therefore, while the settlement system obviously made it into the final game, it was never fully integrated into the core gameplay loop and likely wasn’t developed/optimized significantly beyond its initial game jam draft version.

Finally, this is a living document. I plan to continue to add to it as time goes by. If you have any additional questions about how any vanilla settlement mechanics work, please ask in the comment thread for this article and we will research them and possibly add them to this article. For now, items that are unconfirmed are marked with “ ** ”.

Also, I use two mathematical symbols that people may not be familiar with, floor and ceiling, to represent the same functions used in Bethesda's scripts:

Defense, Attacks, and Combat Near or In Settlements​
Defense
Attack Chance Calculations

Attack Success/Failure Calculations if You Don’t Show Up 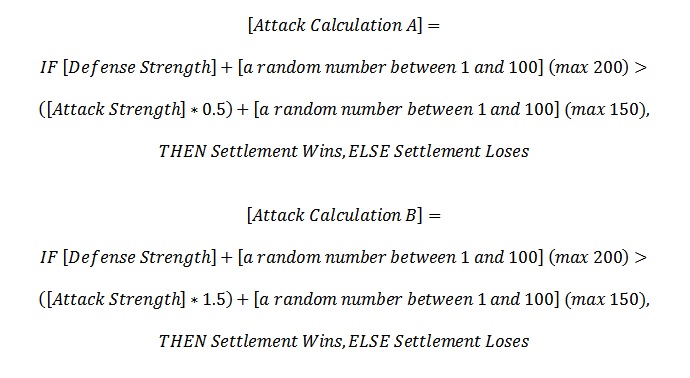 What Happens When an Attack Succeeds?

If you have any questions, feedback, or thoughts, on this article, a discussion thread is available here: