WORK IN PROGRESS
Content of this page is subject to changes, while I am working with the series and formatting the text.

This guide is a collection of posts, which includes modding basics and tutorials for popular tools.

1. Activate modding
First steps to take is to activate modding for your game. What does this mean? Game does not read third party resource file archives by default. This feature must be activated from configuration files. You will need to edit in to 2 files to make this happen.

Make sure that you have run the default launcher of the game at least once. This will generate proper configuration (INI) files for your game.

You will do these edits in your Documents > My Games Fallout 4 section. First I recommend setting File name extensions visible.

If you do not have Fallout4Custom.ini file 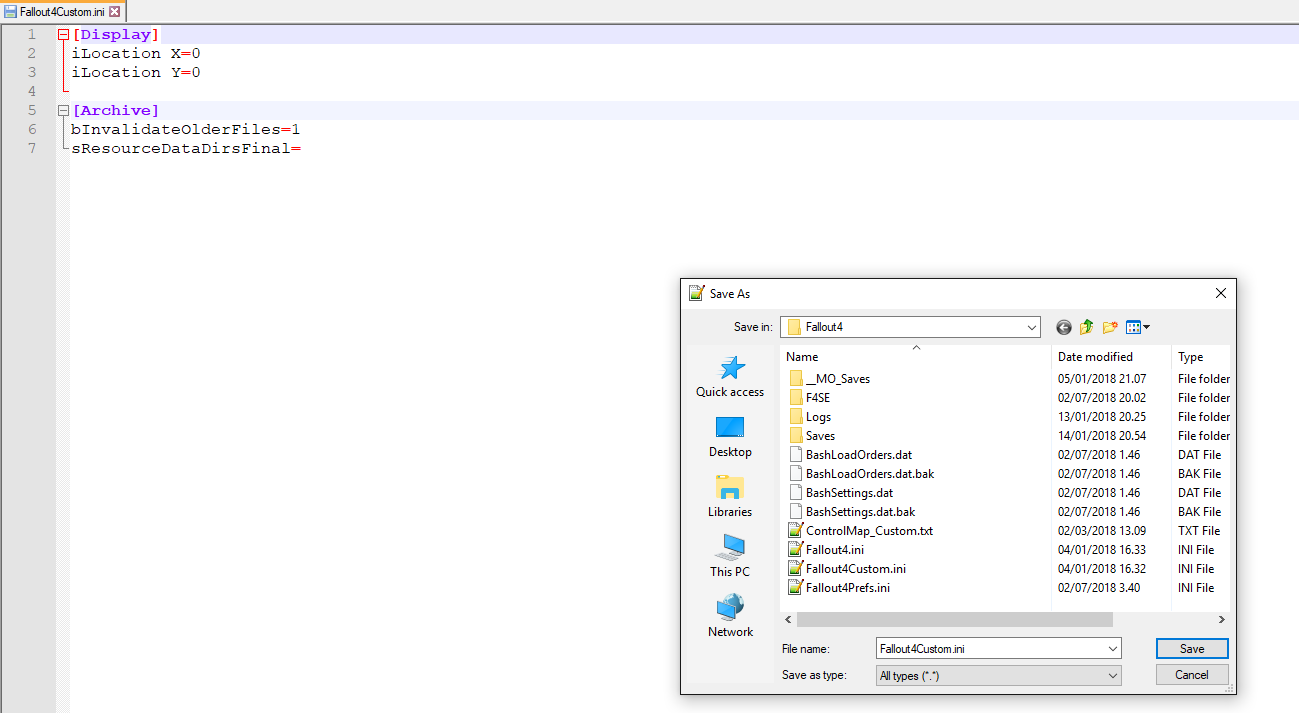 2. Nexus Mods and Bethesda.net - quick look
There are two standard locations to get mods for your games.

This guide will have specific instructions for both locations. As a fast overlook, both of these sites are free and both require registration. Neither of these services spam you e-mail, like some other would.


3. File extensions and load order basics
Fallout 4 uses several files. This section helps you to understand what they are and what they do.

Files appearing in your load order

Files in your Data folder

See more about load order and tools to manage it from following chapter of this guide. Mod Manager specific articles will explain how to work with your load order with them.

1. Understanding the load order
Load order is the hierarchy between plugins (ESM, ESP and ESL) in your game. These plugins contain records, which are editing official master files, or reading data from them. Plugins can also edit other plugins above them, or collect information from them.

All files in the game are using Fallout4.esm as a master. They can also use other official DLC files or mod files as masters, depending on which records and resources they need. If mod uses resources from Far Harbor DLC, then it requires the respective ESM file as a master. This is true, even if mod wouldn't use records from DLC, because ESM needed to load the BA2 archive that contains required resources.

Official plugins and resources are installed in to your ...SteamApps\common\Fallout 4\Data folder. If you have all official DLCs, then list of plugins is the following:

Sim Settlements is designed in a way that it only requires Fallout4.esm as a master. Addons to it may require other DLCs as master. Pay attention to requirements, when downloading and installing Sim Settlement addons or other mods in to your game. If one of the installed mod is missing a master, then game will not start. It will crash directly after Bethesda logo instead. 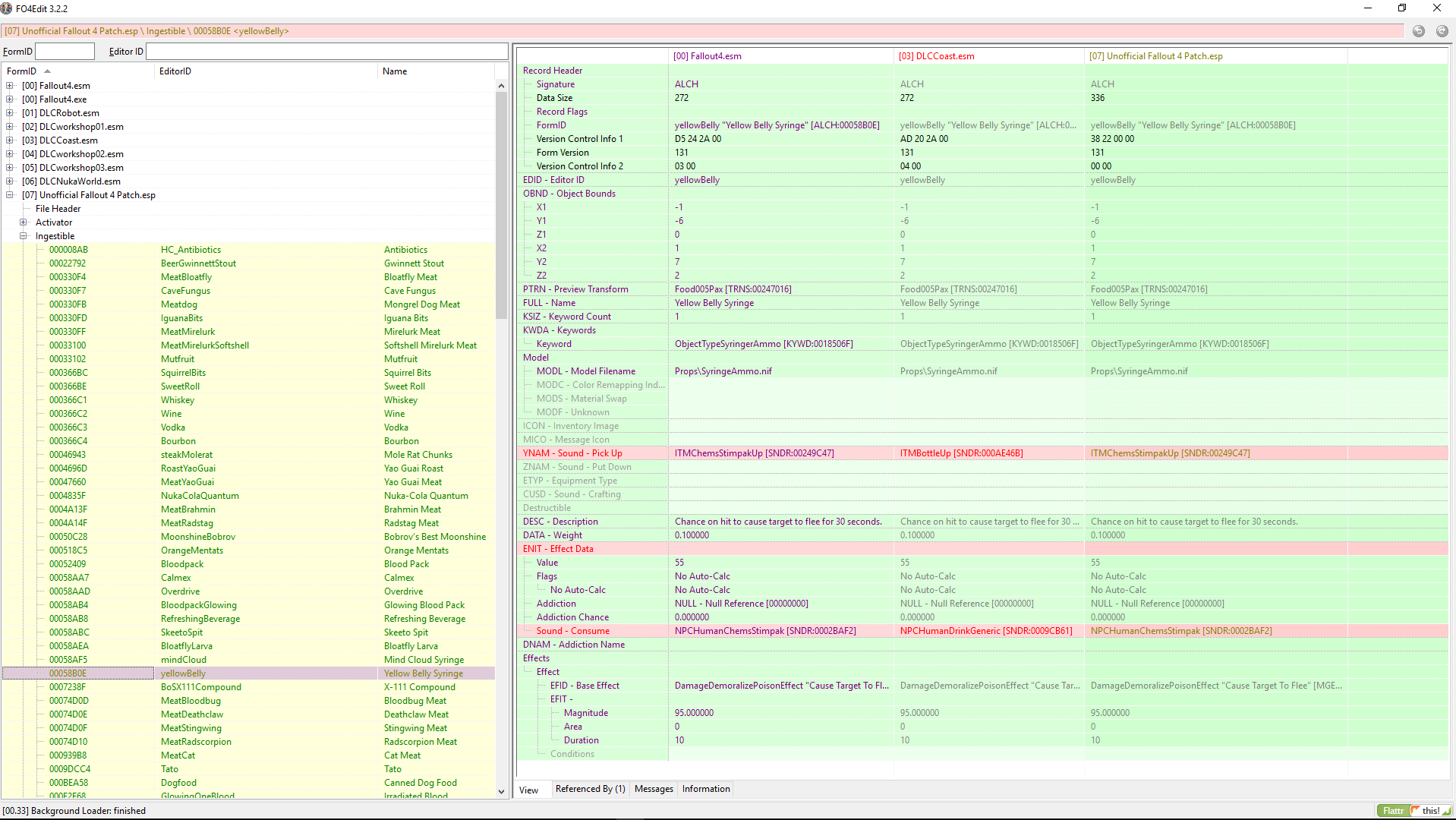 Records from plugin files do not always conflict. More often they add new records and keywords in to game, instead of editing other files. Most mod files adding new keywords are EMS-files.

Setting up your load order is important matter, because wrong type of conflicts can cause instability and oddities in your game. Basic rules are easy to understand. Solving conflicts between mods otherwise requires that you pay attention to mod author notes and instructions about conflicts and solving them. Most mods can be made compatible with a proper patch.

There is a tool called LOOT (Load Order Optimization Tool), which attempts to sort your load order automatically. We will talk about LOOT later in this post.

2. Understanding resource priorities
Resources are files that contain information outside of plugin file. These files can be scripts, meshes, textures, DLL-files or even JSON files. They are usually packed in to BA2 files. These archives are loaded with the respective plugin. If plugin is disabled, then these archives and their content are not loaded at all.

Resource priorities work like your load order does. Content in the archive gets loaded with the plugin file. If there are any conflicts between resource files, then files loaded last will take effect in your game.

Standard users do not really need to pay that much attention to resource priorities, when dealing with content packed in to BA2 files. It is important to understand how resources work and what to look, if you suddenly see wrong sort of content in your game. Because archives are loaded with plugins, then conflicts can often get solved by changing the load order.

Not all resources are packed in to archives. These are so called Loose Files. These files do not load according to load order and act as direct replacements to files they edit. Loose files will always win all conflicts against files in archives.

This can be both practical and problematic. Loose files do not have plugins, so changing them do not cause record change shock for your game. You can just swap loose file texture mods in and out, without worrying about damaging your save files. However, they also tend to cause more loading in your game than archived ones. Loose files are also harder to uninstall, unless you are using a proper mod manager that makes the process easy for you.

LOOT can be downloaded from here: https://loot.github.io/

Using LOOT
For basic use, LOOT is a very simple tool.

You are done. Happy modding.